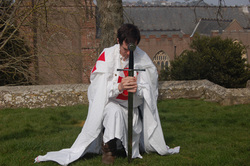 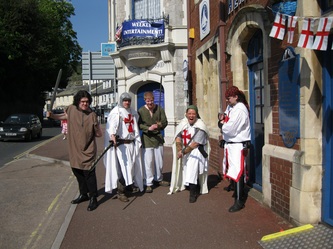 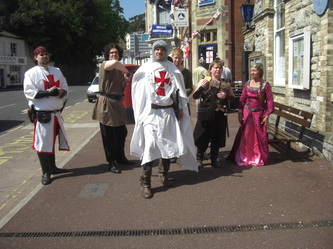 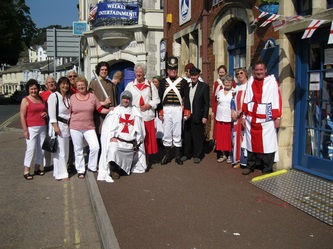 IMPORTANT NOTE
We wanted to post this disclaimer in light of  BBC news reports relating to recent world events. Yes, we are doing a theatre show next month about the Knights Templar. This is however a HISTORICAL performance, by enthusiasts of history, relating soley to history, and has no religious/ racist/ political/ any other agenda or "axe-to-grind" whatsoever. As always, our group has a STRICT ethos which has no place for discrimination against anyone. If you have any questions or concerns, please message us via the contact page on the website

Talked about in 2010, and finally being put into action in 2011, this is a spinoff project by some medieval history/ myth enthusiasts within the group. This project is beginning with street theatre and school talks, relating to the history and mythos of the Knights Templar, and is hoped to become a mixture of theatre and living history, if the project expands as planned.
For 2011, our main project is the interactive street theatre show, The Lost Templar Fleet,  telling the story of the arrests of the Knights Templar in Paris, during October 1307, and exploring the myths of the treasure believed to be missing from thier Paris Temple, and of thier fleet that disappeared from La Rochelle.
This is due to be performed at Brixham Quay on Thursday August 4th 2011, and later in the month in both Paignton and Brixham (dates to be announced), with further performances and appearances in the planning stages.

Despite being in the early stages of planning, our theatre company are already recieving enquires about not only the main play, but also to make spin-off appearances at local schools for historical talks and to put on living history shows at local fete's and community events. Film actors are interested in beling involved, and the project is growing steadily, and the consesus within the group is that we are now aiming to make the project into an ongoing "showteam", with theatre shows, educational visits and living history encampments.

If you would like to become involved in this project, it is open to new people, as well as existing members of the South Devon Players, please  contact us to arrange an audition date.
The group requires a variety of medieval characters - it is not limited in age or gender! So, if you would like to play any medieval character, whatsoever, you are most welcome to join.

Research sources
This is a link to a page which we are compiling with research links that will be of use to people getting involved in the show.
RESEARCH LINKS PAGE