Dec 30th 2010
We are in desparate need of two male actors to play the slave traders Samir and Quataiba as the two actors originally cast have had to pull out. Show dates are being booked as we speak, rehearsals are every wednesday evening from next week at the British Legion, Brixham, shows on various dates between April and August, in the Torbay area.

Obviously its not paid but the usual actors getting programmes photos and references on completion of run apply.

Actors need to be reliable attenders at rehearsals and shows.

We are putting the word out early, but our current sound/ lighting technician is leaving to go to University in August 2011, and therefore from this time onwards we will be looking for a new person to fill this role.

It is a voluntary position, and will involve attending evening rehearsals between 1 and 2 times per week, as well as shows (weekends, and evenings) as required. Full training on the systems is offered to the right candidate, credit in theatre programmes (always useful for portfolio building) and after completion of one full show-run, references for study/ work applications can also be provided.

You need to be based in South Devon, and able to attend rehearsals and shows in  the Torbay area. Equipment is provided.

You will be required regularly from August 2011 onwards, however during the spring of 2011, you will be asked to attend some runthroughs with our current technician.

We are a non-profit group, and cannot provide payment. We would like to offer this placement to someone from the local area who wants to develop thier skills. You can be male or female, all we ask is that you are aged over 16, and reliable in attendance.

Find out more about our theatre company at http://southdevonplayers.weebly.com  and to apply please email Laura, the secretary, on bardic_dreams@yahoo.co.uk


Dec 1st 2010
So while this evening we are still getting ready for the  Winter Carnival, I am going to say a few things.

1) wear your thermal undies, and in-character cloaks are going to be provided, unless like Louise youre wearing a burkha or something that you can put 10 woolly jumpers on underneath. While out-of-character stuff cant be worn in the parade, in-character hessian sacks will be provided with the pirate loot, and coats etc can be shoved under the loot in the sacks.  No-one will be expected to appear as a slave girl in a voile bikini!

2) Take your cossies with you tonight. if the cold bangs down to -25 (local rumour in town as to the weather for Saturday) or something, then its fully optional whether you turn up or not to the parade! (just ring me on the day if pulling out) I will still be there come hell or high water, so will at least four of us, but obviously different people feel the cold differently.

3) Whatever you do, wear flat heeled boots! High heels are not a good idea.

The show date for the Barbary Pirates show at Brixham Pirate Festival has been finalised, and will take place at the Old Fishmarket, Brixham, on April 30th 2011 at 7pm.

The committee meeting that was held yesterday was highly productive. the possible purchase of some new sound equipment to compliment that currently existing, as well as lighting equipment is being looked at.
There was also a long discussion on discipline, and committment of members involved in shows, with a much stricter framework being gradually brought in over the next months, in order to facilitate the further raising of performance standards across the board.
Adverts will also be placed looking for a regular seamstress, and a sound technician, to spread the load of work.
There will also be several major publicity drives during the winter, which all members are asked to help with.

Show:  The Barbary Pirates
Performances between April and August 2011 in the South Devon area. Including national theatre competition entry.

Performers required
We are looking for RELIABLE male and female performers to play pirates, convicts and bellydancers. You need to be aged 16 -116, live locally to be able to attend weekly rehearsals and workshops (Wednesdays 7.30 - 9pm) in Brixham. Free training in bellydance and/or stage combat included. Experience not required, but enthusiasm, regular attendance and effort are a must. Re-casting several roles due to timewasters. The project isnt paid but lots of free dance and combat training, with photographs, and references upon request, for future drama/ theatre studies all provided upon succesful completion of the "run".


About show...
Based on historical accounts, this story is of a group of Devon fisher-folk taken prisoner by a fleet of Barbary Corsairs, and their subsequent adventures.
Rehearsals are currently underway, applicants will be asked to join us at rehearsal and workshops for an evening, and if successful to attend from there on. 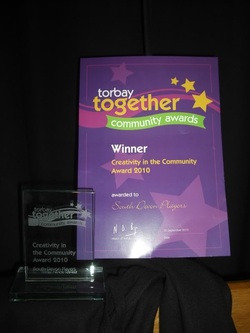 Sept 19th 2010
looks like the South Devon Players theatre group, Brixham made about £500 from the fundraiser yesterday.  Thanks to all who helped make the day a success. :)